After a shorter than usual offseason, Brian Cooper and the AutoMaxx Racing team headed down to the Stockton Dirt Track to get in some early racing. The team originally didn’t plan to run, but Brian’s brother Todd, who had raced once since 2017, was presented an opportunity by fellow racer David Pierce to drive his new car at the event, so Brian got his car ready to race as well.

Brian started on the front row of his heat, proceeding to take the lead at the drop of the green flag and never looking back, claiming the easy heat race win. Todd on the other hand had to start last in his heat. Since he was still getting adjusted to his new ride, Todd was only able to move up one spot to finish 4th.

Unfortunately for Brian, the redraw did him no favors as he had to start 10th in the feature. With Todd also starting 16th, both brother’s had plenty of work to do if they wanted a solid finish. Brian quickly went to work once the race began, moving into the Top 5 within the first 5 laps, where he settled into battles with the likes of Jason Nation and Tommy Fraser over the spot. Meanwhile, Todd was steadily moving forward, moving up to 10th by the halfway point in the race.

As the laps began to wind down, cautions began flying left and right, which helped Todd move further and further up the running order. Then, as the race went under yellow with 5 to go, Brian, who was running 5th at the time, had to pull off with a right front flat that would ultimately end his night. Over the final 5 laps, Todd was able to move from 8th up to 4th to take home a Top 5 in his return to dirt racing.

Todd was happy with his performance Saturday night, saying “It started out with a bad pill draw. Finished 4th in the heat, so that put us starting 16th in the main. Car was good. Was able to make it up to a 4th place finish. This all wouldn’t be possible without David Pierce asking me to wheel his badass hot rod. We had a blast racing together and am hoping to team up some more in the future.”

Brian remained positive despite the result, saying “Night started out with a good pill draw which had us starting P2 in heat 1 and checked out for the heat race win. Then drew the 10 for the redraw. Was up to 5th at one point and started having some carburetor issues with it loading up in the corners. Eventually got a right front flat ending our night. Was really happy with the car after we made wholesale changes in the front end. I want to thank all my sponsors, crew and my wife for allowing me to do what I do”

And Supporters:
David and Rena cooper
My wife Stacey Bartlett-Cooper
Crew guy and friend Michael Sevigny
Interested in having writeups like these done for your race team throughout the season? Contact Daren Ricks of DRC Motorsports Media here on Facebook, at darenricks999@gmail.com or at (916) 229-7474 to discuss a plan that fits your team’s needs. 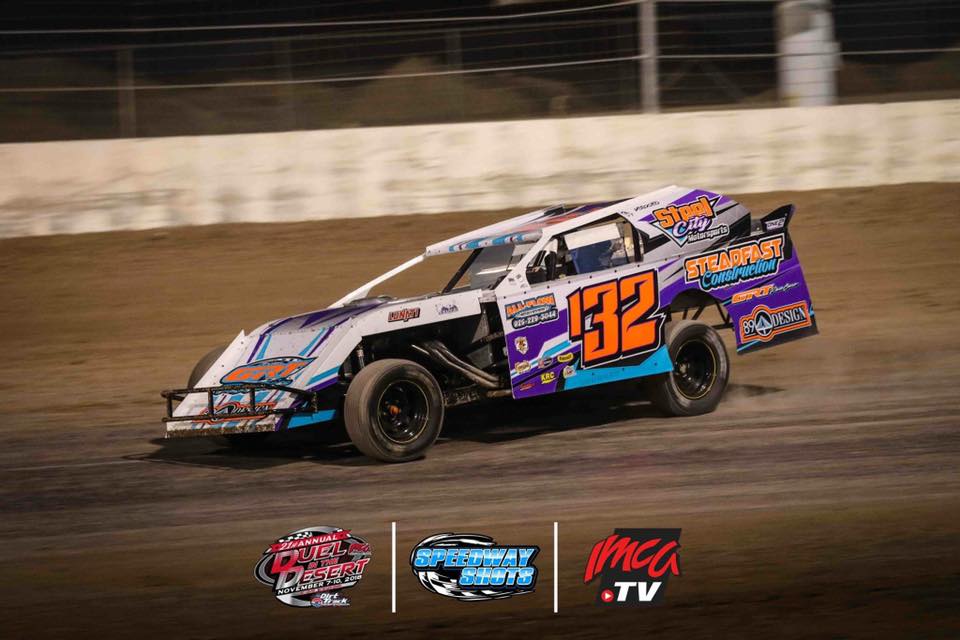 After a highly successful rookie season in the Sport Mod class for Brent Curran, the Antioch native looks to build off an already impressive list of accomplishments heading into the 2019 season.

Curran and team would kick off the 2019 season on New Year’s Day at the Stockton Dirt Track, as some of the top drivers from across the state flocked to the 4/10ths mile oval to ring in the new year. A nice pill draw would set Curran up with a front row starting spot, and as soon as the green flag waved, he was gone. 2nd and 3rd place did all they could to reel Curran back in over the 8 lap heat race, but weren’t able to make any inroads, leading to an easy heat race win for Curran.

Curran’s pill draw luck would continue into the redraw, as Brent drew the pole position for the main event. From the drop of the green it again looked to be Brent’s race to lose. Despite a multitude of early cautions, Brent would pull away on each ensuing restart. Once the race finally settled down, Curran settled into a groove, setting the quickest lap of the race while holding a steady advantage over 2nd place runner Jason Nation.

As Curran closed in on lapped traffic, Nation slowly began closing in. Though Nation was starting to reel him in, Curran looked like he had a big enough advantage to hold on for the win, but that would all change in the last few laps. With just 2 laps to go, Curran caught up to the back of 2 lapped cars racing side by side. This slowed Curran enough for Nation to pull up to Curran’s bumper as they took the white flag. The two cars running side by side finally ran single file but Curran was left nowhere to go as Nation had pulled to his outside heading into turns 1 and 2. The two raced side by side as they headed down the backstretch, but Curran was still stuck behind lapped traffic, giving Nation the space needed to make a last lap pass for the win and forcing Curran to settle for 2nd in a race that he easily had the speed to win.

A disappointed Curran had this to say after the race: “Bitter sweet night tonight for the first race of 2019. Day started of great taking the win in the heat race. Started pole and lead the whole main till the last lap and got boxed in by a lap car. Ended up p2. I could sit here all night and think of plenty of excuses or scenarios that could’ve changed the way things turned out but bottom line is it’s racing and sometimes the cards don’t play out. Either way good start to the 2019 season and even better to spend the day with family and friends. Can’t thank the team enough for giving me a bad fast car and my sponsors for making everything possible. On to the next one.”

Brent would like to thank all of his 2019 Sponsors and Supporters, including:

Steadfast Constitution (Randy Cotton)
Steel City Motorsports (Keith and Amber Brown)
GRT Race Cars (Zach Wehlage)
All Flow Muffler and Auto Repair (Danny Larson and Jeffrey Erickson)
89 Design
Lunati
Interested in having writeups like these done for your race team throughout the 2019 season? Contact Daren Ricks of DRC Motorsports Media here on Facebook, at darenricks999@gmail.com or at (916) 229-7474 to discuss a plan that fits your team’s needs.