It’s hard to understate just how dominant Jorddon Braaten has been in the Sport Mod class since the division made its way to the state of Oregon. The Central Point native has more than double the wins over 2nd place in the division’s existence in the state, racking up numerous track and state titles in the process.

Braaten’s dominance was on full display once again in 2018, putting together a 17 win campaign across a 30 race slate in Oregon and Northern California. Braaten’s high win totals and consistency helped rake in other accolades as well, including another state title, and a Top 10 placement in IMCA national standings.

The 2 time Southern Oregon Speedway Champ doubled his career number of championships in just 1 year. Braaten became the inaugural champ for the division at Willamette Speedway in 2018. Braaten took home 7 wins across the track’s 13 race schedule, 5 more than the next highest driver.

On top of his Willamette title, Braaten claimed the Cottage Grove Speedway championship in impressive fashion. After a rough early season run, Braaten went on a 7 race win streak to completely run away with the title. Braaten would wind up with 9 wins over the 13 race season, including an impressive weekend sweep of the Mark Howard Modified Nationals in late August.

Braaten kicked off his 2018 at the Arizona Mod Tour in Mid-February, and it was a big learning experience for the team. Facing some of the nation’s top talent in the Sport Mod division, Braaten made the feature on all but one night, finishing between 11th and 16th in the 6 features he started.

One accomplishment that Braaten couldn’t match in 2018 was repeating as the R Charles Snyder Salute winner. This past year’s edition saw over 50 cars enter, with Braaten coming up just short of a $2,000 payday, taking 2nd.

As we look to 2019, there’s no question that Braaten will once again be the favorite week in and week out wherever he decides to race. You can expect to see Jorddon Braaten in victory lane plenty again this season.

Though 2018 was an up and down season for Matthew Drager, the Albany based team showed substantial progress in the last few months of the season that has given Drager plenty of optimism heading into 2019.

The first couple of months were rough for Drager and his team. They battled a myriad of mechanical issues that limited the amount of races that Drager was able to run, even leading to Drager racing for multiple other car owners across the May and June months.

In late July Drager was back into his own car after replacing the rear clip on his chassis, and the change in performance was blatantly obvious. The first night back in his new car, Drager towed up to Gray’s Harbor Speedway. It looked like Drager was well on his way to a victory before late contact with a lapped car ended his chances at the win.

Drager followed those up with another strong showing at one of the state’s biggest modified races, the $5,000 to win R Charles Snyder Salute, running in the Top 10 early before fading late in the 50 lap feature. This didn’t faze Drager, as the team’s momentum carried into the final two points races at Willamette Speedway, taking finishes of 2nd and 3rd over the last two weeks. Drager’s season would end at the annual Duel in the Desert, where he had a nice showing, making one preliminary main, but just missing transferring into the big show by three spots on the final day.

When asked about his thoughts on 2018, Drager said “2018 was a challenging year but has us motivated for a strong 2019. It was rough in the fact that we got so tore up early and missed half of the year but when we got back in our equipment we had some really good runs and I’m optimistic for what the next year holds.”

Day 1: DNF in heat due to debris, drove from the back to 8th in the B Main before contact ended night.

Day 2: Finished 3rd in heat, finished 2nd in B Main to transfer to A, finished 18th in feature after starting 29th

Day 3: Started 5th in LCQ but finished 4th, 3 spots out of transfer spot

Matthew would like to thank all of his sponsors and supporters, including:

Aamco of Corvallis and Lebanon

Grandma
Interested in having writeups like these done for your race team throughout the 2019 season? Contact Daren Ricks of DRC Motorsports Media here on Facebook, at darenricks999@gmail.com or at (916) 229-7474 to discuss a plan that fits your team’s needs.

Ford’s travels across the Northern half of California rewarded him in a big way in the IMCA state standings as well, with his 22 starts in the state earning him a strong placing of 5th. Of all the tracks he raced at, Marysville Raceway easily had to be his best, only placing outside the Top 3 once in 7 starts, which also included a win and two runner up finishes.

In the midst of 2018, Ford made a couple of stops at tracks that had not raced the division before this season. Ford made appearances at the inaugural Sport Mod races at both Orland Raceway and Fernley 95a Speedway in Nevada. Fans in Orland were treated to a fierce battle between Ford and Olivehurst gasser Phillip Shelby for the entirety of the race, with Ford falling just short in the end. Ford would also finish 2nd at the first ever Sport Mod race at Fernley.

Ford would make appearances at 2 of the most prestigious Sport Mod races on the West Coast in 2018, the R Charles Snyder Memorial in Medford, Oregon, and the Duel in the Desert in Las Vegas. The trip north to Southern Oregon Speedway proved to be an immensely successful one for Ford. Piloting Marty Burdine’s number 79, Ford drove up to a 2nd place finish on night 1, then followed that with a B Main win and a charge through the field to claim 6th in the Main Event. After a couple of okay nights at the Duel in the Desert, Ford went into the final night with one final chance to make the big show. After starting 8th in his last chance qualifier, Ford drove through the field and into a transfer spot. But with 3 laps to go, tragedy struck, as Ford’s car broke a rear gear, ending Ford’s weekend.

After a busy 2018, Ford has big plans for 2019, saying “We plan on running races in Oregon, Nevada, California of course, Arizona and if I can get some sponsorship the Super Nationals in Boone, Iowa.” Ford had this to say on 2018 as a whole: “The year was amazing, we raced in three states won in two of them and a second in the other. How many drivers can say I won 4 races at 4 different tracks and 2 states?”

Jimmy would like to thank all his sponsors and supporters, including:

Running in a spot to transfer to big show, but lost rear end late

July 25th: 2nd
Interested in having writeups like these done for your race team throughout the season? Contact Daren Ricks of DRC Motorsports Media here on Facebook, at darenricks999@gmail.com or at (916) 229-7474 to discuss a plan that fits your team’s needs. 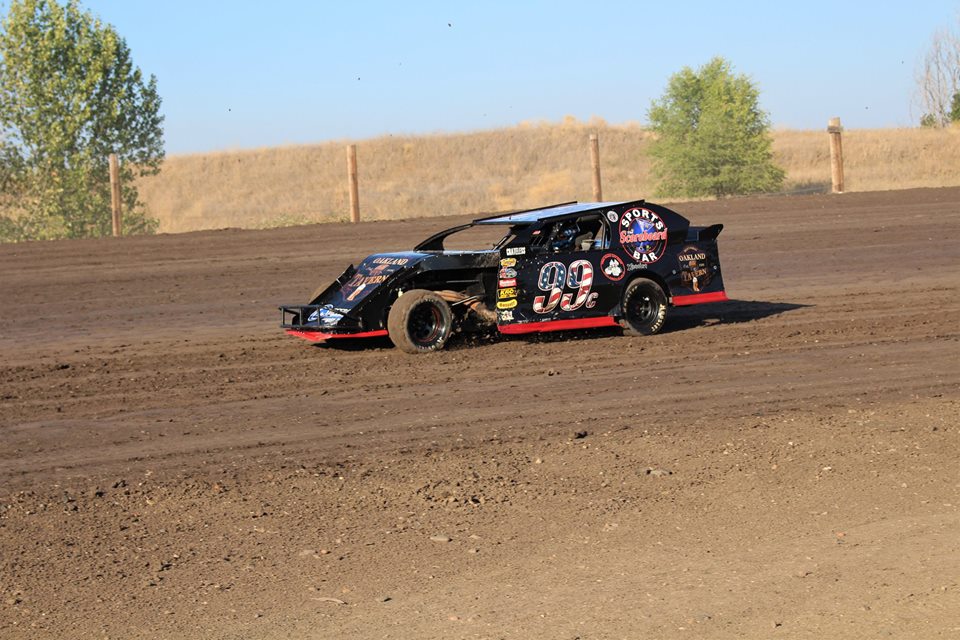 After an up and down rookie season in 2017, Roseburg, Oregon’s Doug Coffman showed impressive improvement this year. Considering Coffman primarily raced at Cottage Grove Speedway this season, a track that averages almost 20 cars a night, having only 2 finishes outside the Top 10 seems like a big success for the 2nd year SportMod driver.

The biggest moment for Coffman this season easily had to be claiming his 1st career win in his last start of the season, late in September at Southern Oregon Speedway. Coffman had won his heat race earlier in the night, then set sail in the main event, beating two of Medford’s best in Rich McCoy and Justin McCreadie to seal the deal. Though he only made limited starts at the track in 2018, it appeared to be one of his most successful. Besides the season ending win, Coffman was also in the running for the win at the Speedweek race in June, before ultimately settling for third behind McCreadie and Brent Curran.

While his first career win was a big deal, almost equally as impressive was his 3rd place run in the Cottage Grove Speedway track points. To be able to say that you were the third best car out of a consistent 15-20 car field in only your second year, is a pretty significant accomplishment. While Coffman wasn’t able to win at his home track, his outstanding consistency kept him in the hunt for the track title for the majority of the year.

One more accomplishment to note was the fact that Coffman came home 4th in Oregon IMCA SportMod State Points. Had he been able to make a few more of the Willamette or Medford races, Coffman may have been in the running for a spot in the Top 3.

When asked about his thoughts on the 2018 season, Coffman said “A season full of many ups and downs that I will never forget #SENDINGITFORCINDY”  With the improvement we all saw out of Doug Coffman in 2018, there’s no doubt in my mind that he will be up front contending for wins far more often in 2019. Look for Coffman to make a run at both the Cottage Grove track title and the Oregon state championship.

Doug would like to thank all of his sponsors and supporters including:

September 15th: 5th
Interested in having writeups like these done for your race team throughout the season? Contact Daren Ricks of DRC Motorsports Media here on Facebook, at darenricks999@gmail.com or at (916) 229-7474 to discuss a plan that fits your team’s needs.